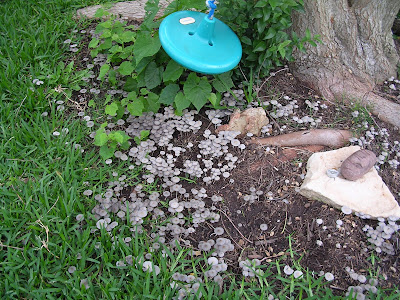 Toadstools? Mushrooms? You decide...I think I will just call them Fungi and leave it at that. Whatever you call it, we have had plenty of rain to encourage their growth. 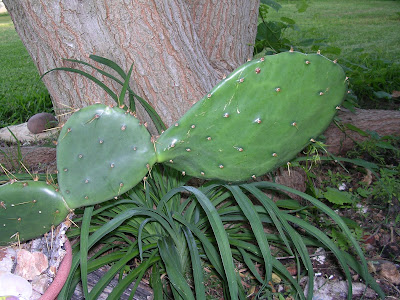 This isn't really a bloom, but a new lobe on a Prickly Pear. This cactus was growing in the largest Live Oak on our property. Last year we had a crazy hailstorm that knocked it out of the tree, and I potted it up. It is very happy in it's new home and put out this new growth. 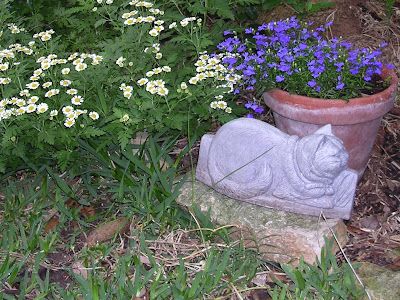 Chamomile and Lobelia. Lobelia is also called Indian Tobacco. Native Americans would smoke it for asthma. It has properties that are similar to nicotine. It is also called Puke Weed, for obvious reasons. 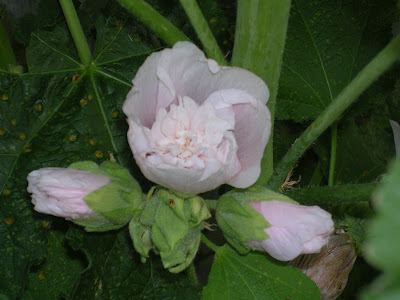 I planted Hollyhocks last Fall, but sadly no Outhouse yet to go with them. 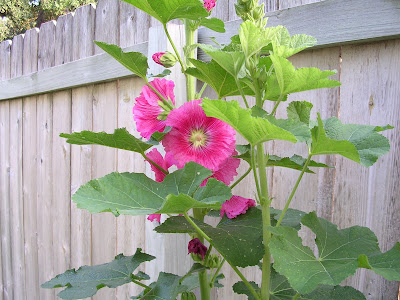 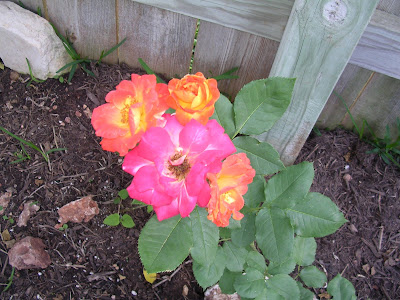 My one purchase this Spring--a cheapy climbing rose from the grocery store. It's called Jacobs Coat because it changes colors as the blooms mature. 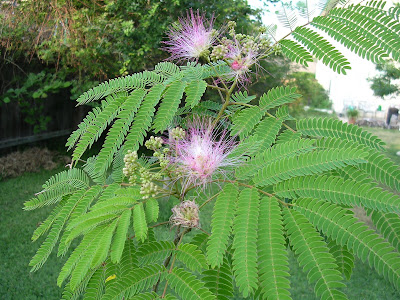 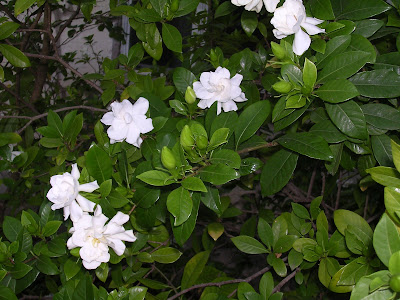 The gardenia blooms are smelling heavenly as you walk up to the front door. Charley picked some to take to her teacher today. 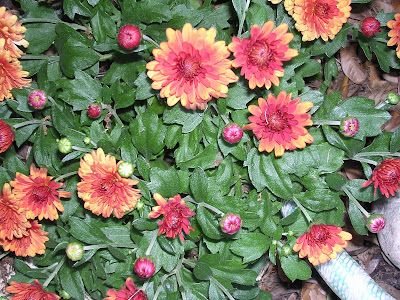 Yes, I have mums blooming. I am a lazy gardener and do not pinch off the buds. I found if I leave them, I have two nice blooming periods each year. Once in the Spring and again in the Fall. 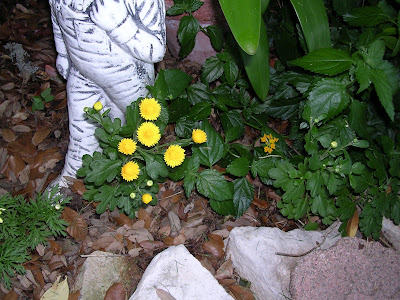 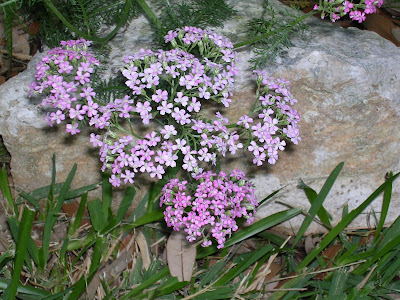 I thought the Yarrow looked nice against the limestone.


Posted by Morning Glories in Round Rock at 8:01 PM

Ohhh, gardenias! They always remind me of my high school dances. More often than not that's the flowers we got way back when. :) I don't pinch mums either, and enjoy the blooms whenever they come. Your hollyhocks are looking great. Such good luck with them-I have never had any. The yarrow does look great against the rock. A good spot for it!

Ah, yes. High School dances. I got an Orchid for my senior prom...I remember thinking it was so exotic. :-) Glad to hear you don't pinch mums either. I look forward to their blooms every Spring.

I love all your color. That's so cool about the prickly pear--they do root easily. They are actually native to Michigan (though few here know it) and a great addition to the perennial garden!

Gardenias are one of my favorite smells. They are lovely.

I didn't know that about lobelia. Those are interesting tidbits of info.

The gardenia must be wonderful as you walk to your front door! I keep admiring it--and smelling it--in the garden centers, but here it isn't hardy over the winter, of course. I love the electric blue of lobelia; I never knew about its properties, though. I think I'll stick to my Sudafed:)
I have yarrow growing next to some big boulders in the yard, too; I agree it's the perfect place for it.

Your hollyhocks and mimosa is way ahead of mine; I need to move further south! I had to laugh, I forgot that people used them to "camoflage" their outhouses, that brings back some memories! I think my grandparents also used castor beans and sunflowers along side theirs.

I had a huge gardenia as a house plant many years ago. It was grown from a slip my Grandmother gave me.

After I lost it, I bought new plants several times. The always turned out to be infested with bugs.

I decided to try it again and bought one from my local nursery last week. I hope I get to enjoy this one bug free. The scent is heavenly.

Love the photo of the yarrow over the rock. Jacob's Coat is lovely. Very striking with the different colored blooms. Love the kitty statue.
Marnie

What lovely blooms, I had never ever heard that about Lobelia and asthma, maybe I should try it... or maybe not! My brother has a Prickly Pear cactus in a pot which he has had since a boy and he swears that when he walks past it jumps out and stabs him!! I can almost smell the Gardenia from here. A lovely post.

Monica, I think you are right about the Prickly Pear being a nice addition to the perennial garden. They are so thick down here, they are a nuisance to the ranchers and farmers--they don't share our opinion. You do have to respect those prickly needles!

Susie, Lilac has always been my top favorite fragrance, but gardenia is a close second, I do believe.

Rose, I would think you could have gardenias in pots and overwinter them inside--garage or basement. They don't mind a little freeze every now and then, but not like what you get all winter!

Nola, I put my Hollyhocks in last Fall. They were happily putting down roots all winter, and just took off as soon as the weather warmed up. I found an outhouse up north when we went on vacation last year. It would have made a perfect potting shed. If I would have had a way to drag it home I would have! Now, I have outhouse envy! I could just imagine what our Homeowner's Association would have to say about it!

Marie, I hope you have success with your new gardenia. It is certainly worth the effort to get a wiff of that amazing fragrance. Mine are very happy tucked in the corner on the front walkway. They are probably 7 feet tall and just covered in buds!

Marnie, The kitty statue was not exactly what I wanted, but until I find the right one, will do. I bought it to mark my dear Vanity's grave. She was my cat that saw me through a nasty divorce and lots of changes in my life. She was 16 when she passed away.

I wouldn't advise smoking Lobelia--if you didn't have asthma before, you might afterward! LOL!

I can sympathize with your brother--my cactus seems to "get" me quite often. If I garden around it, I usually end up with the tweezers in the evening, trying to extract all the needles. You would think I would learn to wear gloves!

Puke weed?? Hahahahaha - I've never heard of that!! I do love lobelia. Just never heard it called that. I especially like the dark blue like you have. Mine usually dries up half-way through the summer.

Gardenias! How lovely! And your rose is really pretty. Your mums too. Thanks for taking us with you on your garden walk.
Hugs

Hey Wendy! You never knew reading my blog could be so educational did you? Hee,hee,hee!

So interesting about the Lobelia. I just grew some from seed and it is so delicate and pretty. Hard to believe what it's called--didn't know it had the properties of nicotine;-) Glad to learn all of this from you!! Love your beautiful garden blooms, they are beautiful. And, I would allow the mums to bloom twice (if only they would!!)...to tell you the truth, I'm a lazy gardener too...I don't pinch mine, and they only bloom in the fall. I know they could look much fuller but, by the fall I am looking at my Japanese anemones which in my opinion, are much more fun to look at!! I have yarrow in my garden this year, so I'll have to see if it'll look as pretty as yours does!!

Jan, It's nice to know there is another lazy gardener out there besides myself! ;-) I do enjoy working in the garden--I just love to get my hands in the earth, but I never have time to keep up with it all. I want my garden to be a source of serenity--not a to-do list a mile long. Sometimes, it becomes that regardless, and then I have to take a step back and tell myself I don't want perfection, I want to feel at peace.

Simply beautiful! Your garden is ahead of mine so I shall walk through yours and anticipate my hollyhocks. Love those little mushroomy things -- cute!

I'm glad you enjoyed my stroll through the garden to see what is blooming. I can't wait to take a walk with you through yours and see all your beautiful blooms too.

Up north the mums die almost to the ground, so can only bloom in fall....no way would take off the buds and lose that Texas bonus crop!

Annie at the Transplantable Rose

Good luck with your Gardenias, Annie. I hope you get a bloom or two this year, and then a bumper crop next!

So pretty. I enjoyed my visit with you and all of your flowers this morning. Hope the rose does really well for you.~~Dee

Glad you stopped by for a visit, Dee. I had told myself no new plants this Spring--but I have already blown that promise to myself! Ha! I NEED more roses in my life. 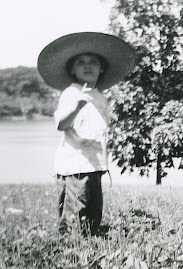 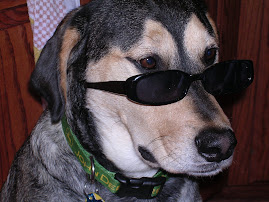 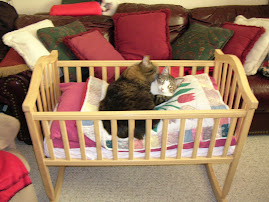